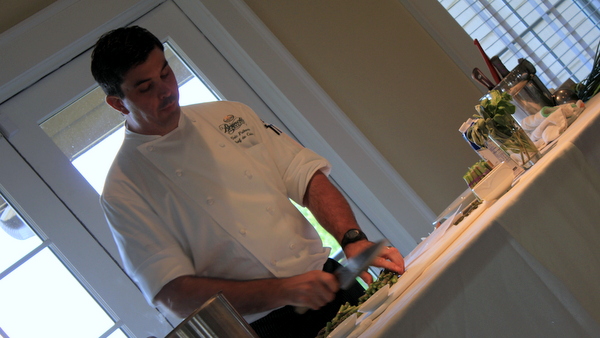 GREENSBORO, Ga. — Even though Chef Eric Fulkerson might be quick to admit he isn’t a doctor, he understands the need for eating healthy.

A year ago, he weighed more than 300 pounds. Through better, healthier eating, he’s lost significant weight.

Now, he’s bringing his lessons on how to eat well to his diners at Reynolds Plantation, even if that means pulling a fast one over on them.

“Healthy is not bad; healthy is needed — especially in the age group we have,” said Fulkerson, a chef at Reynolds Plantation, a luxurious development on Lake Oconee, roughly 80 miles east of Atlanta. “We want to make sure we have options so they can eat in our restaurants.”

Since December 2008, Fulkerson has served at the chef de cuisine at Reynolds’ Plantation Grille. Cooking at a golf club means customizing menus to a diverse base of members while not sacrificing on quality.

But, whenever possible, Fulkerson wants to make sure one lesson isn’t lost.

During a recent cooking demonstration, Fulkerson put together a three-course meal consisting of asparagus soup, mint lamb burgers and flour-less raspberry tart. While the ingredients for the meal included all the spices, seasonings and flavors one might expect to find, there was one food item missing: gluten.

No wheat flour, no problem. The burgers had no buns, the soup didn’t need any and the raspberry tart called for almond flour instead. Eighty percent of the recipes at Reynolds Plantation’s restaurants are gluten free.

“We’re definitely trying to find healthy food that tastes good and that isn’t something that you would think is healthy,” Fulkerson said. “So, it doesn’t have that, ‘oh, it’s healthy, that doesn’t taste good.’ So, we want to show that it’s light, seasonal and tasty.

“A lot of times, we’re just sneaking it in,” he added. “We do specials and there is no starch in the special. There’s a potato puree or a vegetable puree, and there’s a roasted vegetable with it. And, they don’t really realize they’re missing the starch. So, we try to sneak it in as opposed to labeling it outright”

Like Loading...
About Todd DeFeo 739 Articles
Todd DeFeo loves to travel anywhere, anytime, taking pictures and notes. An award-winning reporter, Todd revels in the experience and the fact that every place has a story to tell. He is the owner of The DeFeo Groupe and also edits Express Telegraph and Railfanning.org.
Website Twitter

ABC: Miami the worst for TSA agents with sticky fingers

Amid the pandemic, why did we forget how to drive?

It’s not entirely clear why a pandemic might lead to more bad driving, but some days, taking to the roads seems to be more dangerous than attending a super spreader event without a mask.

ATLANTA — The parent company of regional airlines that fly on behalf of Atlanta-based Delta Air Lines and other carriers has filed for Chapter 11 bankruptcy protection. Memphis, Tenn.-based Pinnacle Airlines Corp. — which owns Pinnacle Airlines and Colgan Air — filed its petition for relief in U.S. Bankruptcy Court for the Southern District of New York. The airlines fly as Delta Connection, United Express and U.S. Airways Express. “We intend to use the Chapter