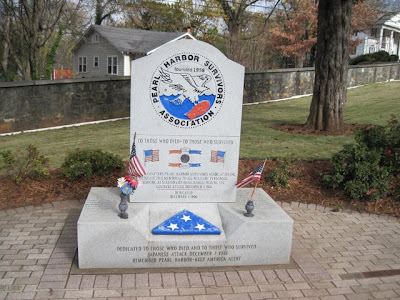 MARIETTA – It was a typical Sunday morning in Hawaii. But just before
8 a.m. 69 years ago, the serene morning quickly turned hellish.

From the morning sky, 353 aircraft Japanese descended on the U.S. Navy
base at Pearl Harbor intending "to destroy America's military
establishment in the Pacific." A total of 2,400 Americans – 1,177 on
the USS Arizona alone – were killed in the sneak attack.

"Yesterday, Dec. 7, 1941, a date which will live in infamy, the United
States of America was suddenly and deliberately attacked by naval and
air forces of the Empire of Japan," President Franklin D. Roosevelt
famously said the following day.

Following the attack, the United States entered into World War II. "I
fear all we have done is to awaken a sleeping giant and fill him with
a terrible resolve," Japanese Admiral Isoroku Yamamoto supposedly said
following the attack. He was right.

"The story of the Pearl Harbor attacks moves me emotionally," Cmdr.
Kyle Campbell, the air operations officer for Carrier Strike Group 12,
said, according to a Navy News Service article. "When you think of how
many service members lost their lives that day, it gives you a feeling
of deep sorrow."

A visit to Pearl Harbor is indeed a moving one. But, remembering that
day and honoring those who made sacrifices on Dec. 7, 1941, and during
the years that followed doesn't require a trip to Hawaii.

On Dec. 7, 1996, at Marietta National Cemetery, the Pearl Harbor
Survivors Association unveiled a monument to the survivors of Pearl
Harbor from Georgia.

"On this day, we are given the opportunity to remember the thousands
of brave men and women who were there that fateful day, and to say
'thank you' to them for their valiant service in defense of our
nation," U.S. Rep. Phil Gingrey, R-Ga., said in a statement.

About Todd DeFeo 741 Articles
Todd DeFeo loves to travel anywhere, anytime, taking pictures and notes. An award-winning reporter, Todd revels in the experience and the fact that every place has a story to tell. He is the owner of The DeFeo Groupe and also edits Express Telegraph and Railfanning.org.
Website Twitter

Why do we travel?

“Would you the chicken or pasta?” the steward asks passengers. I begin to shake at the prospect of airline food. It’s one of the world’s true atrocities. Honestly, who else can make a strawberry taste bad?

Who doesn’t have a case of spring fever?

Pausing to remember the 78th anniversary of Pearl Harbor

The Dec. 7, 1941, attack on Pearl Harbor in Hawaii is one of the seminal moments in American and world history. The event remains relevant today.