The rare Army of Tennessee regimental flag, complete with bullet holes and blood stains, is now being prepared for display within the Southern Museum. Textile Preservation handled the conservation process. 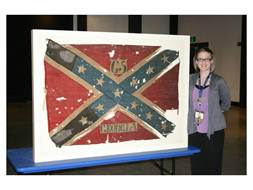 “As part of the conservation treatment, the flag was flattened to be framed for display and preservation,” said Melinda Senn, curator of the Southern Museum. “While undergoing this process, the banner significantly increased in size, up to 6 inches in some areas. In addition, an intensive analysis was conducted, including a blood test.”

The flag was donated by Don Davis, Rhonda Davis Nesmith and Pete Davis. The banner had been in the Davis family for 145 years after Private John Davis of the 65th Georgia Infantry Regiment, who served as the unit color bearer, brought home the flag following the war. Private Davis is the great-great grandfather of the current generation of Davis’.

“It is a true honor that the family donated the flag to the Southern Museum and sets an incredible example to others who may be deciding the fate of such objects in their own family,” said Dr. Richard Banz, executive director of the Southern Museum.

“This flag will not only be an important exhibit for the museum, but it will serve as the centerpiece of an ongoing dialogue about the causes and outcomes of the Civil War,” Banz added. “To fully understand the impact of the Civil War, it’s important to discuss all aspects of this battle flag and others like it – what it meant to the soldiers who fought in the War, what the flag symbolized after the War and what it came to represent to the next generations of Americans.”

The entire restoration project and display is estimated to cost $15,000; $5,600 has already been collected. All amounts of donations are accepted with those contributing $350 or more being recognized within the display.

The flag was carried by its unit throughout the entire Atlanta campaign, traveling with the Army of Tennessee after the fall of Atlanta to Union Forces. It was also carried on November 30, 1864 at the Battle of Franklin (Tennessee), an engagement in which one quarter of the 27,000 man army were killed or wounded in three hours.

The flag was not surrendered at the end of the war as Private Davis rolled the flag up and tucked it into his boot to save it from capture or destruction.

The flag will be on public display at the Southern Museum accompanied with a history and meaning of battle flags.

In addition to the flag, the museum in 2012 is also celebrating the sesquicentennial of the Great Locomotive Chase. The museum is home to The General locomotive, which Union spies on April 12, 1862, stole from what is today downtown Kennesaw.

Georgia roads remain deadly, but the trend may be moving in a better direction.

The state Senate on Thursday passed a bill that would ban people from texting while driving.

Marking the anniversary of the Andrews Raid

By Todd DeFeo / (c) 2010 KENNESAW, Ga. – North Georgia saw its fair share of battles during the Civil War, but “the most extraordinary and astounding adventure of the war,” as one Civil War-era newspaper put it, typically doesn’t garner more than a few words in most history books. The Andrews Raid, also known as The Great Locomotive Chase, took place 148 years ago today. Led by James J. Andrews, a group of Union