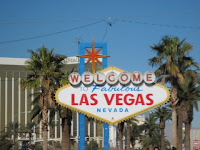 LAS VEGAS — Sin City is usually associated with gambling, but the city does have a number of museums worth checking out.

Here are three for starters (this list is by no means exhaustive):

The world changed forever on Aug. 6, 1945, when the first atomic bomb dropped on Hiroshima.

In the years that followed, Las Vegas was a popular destination for those wanting to see the large mushroom clouds at the nearby Nevada Test Site. The museum’s exhibits not only focused on testing on the site, but also life at the site and its impact on the surrounding communities.

Since 2006, the Pinball Hall of Fame has featured a vast array of pinball machines — ranging from modern machines to rarer classics.

The attraction is free to visit, but it costs to play pinball. Still for most, it’s cheaper than the craps table and just as fun — if not more so.

Most visitors to Las Vegas spend only passing moments in the airport, and for many, that time is in front of a slot machine.

The Howard W. Cannon Aviation Museum, located inside the airport, offers a quick overview of Sin City’s aviation history. And, it’s free, so even tourists who lost everything to the Blackjack table can enjoy this attraction.

So, today is Flag Day. The holiday commemorates the adoption of the flag of the United States. What else would it be?

Pilot’s wife: Husband ‘was not intentionally violent toward anyone’

The wife of a JetBlue pilot from Georgia who faces a federal charge of interference with a flight crew today said that while her husband “was clearly distressed, he was not intentionally violent toward anyone.”

The Nevada Resort Association is warning that an extended shutdown of the state’s resorts and casinos would be devastating for the industry’s workers.