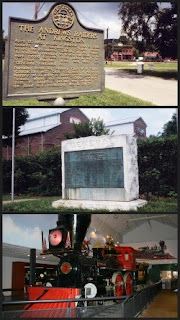 KENNESAW, Ga. — Sitting in a Chattanooga, Tenn., jail and faced with only hours left to live, James J. Andrews had a sense of tranquility.

It was June 5, 1862, less than two months after Andrews led a daring raid behind enemy lines. The Andrews Raid, as it is today known, aimed to destroy the Western & Atlantic Railroad, a major lifeline between Atlanta and Chattanooga.

“The sentence seems a hard one for the crime proven against me, but I suppose the court that tried me thought otherwise,” Andrews wrote in a letter to D.S. McGavic in Flemingsburg, Ky., Andrews’ home town. “I have now calmly submitted to my fate and have been earnestly engaged in preparing to meet my God in peace. … I never supposed it possible that a man could feel so entire a change under similar circumstances.”

Two days later, Andrews was taken by train to the present day intersection of Juniper and Third streets in Atlanta and hanged. His body was buried in a shallow grave, where it remained for more than two decades when it was exhumed and re-interred at Chattanooga National Cemetery.

The Andrews Raid, also known as the Great Locomotive Chase, is one of the more colorful events that took place during the Civil War. A number of museums and historic markers in Georgia remember the raid, including:

The General steam engine, the star of the Andrews Raid, is the centerpiece of The Southern Museum of Civil War and Locomotive History. Beyond its extensive raid-related collection, the museum is home to many war and railroad exhibits. It’s also home to a display about Glover Machine Works, a local engine builder. The Glover exhibit gives museum goers a look at how steam locomotives were built and what a factory of that era would have looked like.

Located in Grant Park, The Cyclorama is best known for its painted depiction of the Battle of Atlanta on July 22, 1864. The theater rotates in a 360-degree circle, allowing the audience to see the entire 42-foot-tall painting. There’s also narration on each part of the scene as the room rotates. While visitors are waiting to view the painting, they have the chance to see the locomotive Texas, the engine that ultimately caught up with the General to help end the Great Locomotive Chase.

If yard signs alone don’t necessarily translate into votes, they do work to reinforce a base of support for a particular candidate.

Jack Link’s plans to invest $450 million in a new manufacturing facility in Perry that will create 800 jobs.

The sewers of Paris are as legendary as the city itself

The labyrinth of sewers winding their way beneath the Paris streets is as legendary as the city upstairs. For anyone interested in learning more about this complex maze winding its way beneath the Parisian streets, a visit to Le Musée des Égouts de Paris (the Paris Sewer Museum) is an absolute must.