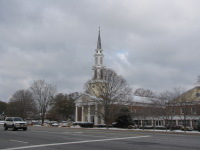 DUNWOODY – Metro Atlanta and much of North Georgia experienced the first white Christmas in nearly 130 years with more than an inch of snow accumulating throughout the area, according to the National Weather Service.

“The highest accumulations (occurred) in the north Georgia mountains, where anywhere between 6 and 8 inches of snow were reported, but even the Atlanta Metro area saw between 1-3 inches – the first measurable snow on Christmas Day since 1881,” the National Weather Service said. “As the system slowly moved east, snow continued on the 26th resulting in additional accumulations across east central Georgia.”

Meanwhile, the National Weather Service said some ice might remain on roads throughout the northern part of the state. However, it doesn’t appear the region will see any additional accumulation.

“The snow from our historic white Christmas is going to stick around for a few days as temperatures struggle to climb above 32 degrees,” WSB-TV quoted its meteorologist, David Chandley, as saying.

A state senator from Roswell wants to end the toll on Ga. Highway 400.

Poll: Family vacations on the rise in 2011

A new survey from TripAdvisor indicates that 83 percent of respondents plan to take at least one one vacation with family members this year.