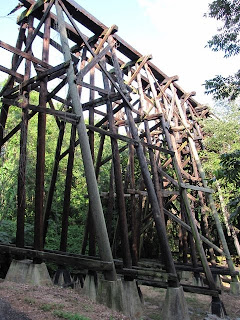 ATHENS, Ga. — To most passersby, the old, abandoned railroad trestle off Poplar Street near Dudley Park probably wouldn’t garner much of a reaction.

But, to music fans, especially those of Athens native R.E.M., the trestle is a landmark. Gracing the back of the band’s 1983 album “Murmur,” the bridge is best known today as the Murmur Trestle.

The trestle was built in 1883 and served the Georgia Railroad and later CSX Transportation, according to the Athens Banner-Herald. The bridge hasn’t been in use since 1998.

Athens-Clarke County purchased the trestle in 2000 for $25,000 after CSX Transportation started to raze the structure. The local government has been planning to incorporate the bridge into a regional trail system, but the bridge has not yet been incorporated into that vision.

For more than a century, Savannah was an important city for the Central of Georgia Railroad.