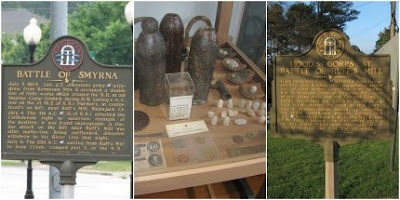 SMYRNA, Ga. — Following their retreat from Kennesaw Mountain, Confederate troops took up positions at what was then known as Smyrna Campground.

The area, located roughly where present day Smyrna Market Village is, was home to a non-denominational religious encampment. Gen. William T. Sherman’s forces, which had taken control of Marietta by July 3, pushed forward, hoping to disrupt Johnston’s troops before they crossed the Chattahoochee River.

“It was 3 PM when we passed the Dow Station. Not far below from Marietta some six miles near the Smyrna camp ground we came upon the Confederate works first their little detached pits sometimes a hole dug deep enough for protection and only large enough for a single man and sometimes large enough for five or six,” Maj. Gen. Oliver O. Howard wrote in his autobiography.

“Here the skirmishing became more and more obstinate I called a halt and carefully reconnoitered Confederate main works stronger than usual in a very advantageous position were discovered,” he added.

Confederate troops formed a line running from Rottenwood Creek on the right to Nickajack Creek on the left, running south of what is today Windy Hill Road and along Concord Road. The center of the line is located in the vicinity of the city’s train depot replica.

“Press with vehemence at any cost of life and material,” Sherman said in a dispatch to Gen. George H. Thomas. “We now have the best chance ever offered of a large army fighting at disadvantage with a river at its rear.”

On July 4, the one year anniversary of the surrender of Vicksburg and Gen. Robert E. Lee’s retreat from Gettysburg, William Grose’s brigade attached the center of the Confederate line. The fighting is today known as the Battle of Smyrna. Later that day, Brig. Gen. John W. Fuller’s brigade moved from Nickajack Creek along Concord Road, investigating the Confederate works.

Following “a bitter struggle,” Fuller “seized the first line of works on Hood’s (right) near the present Gann Cemetery,” according to a historical marker located on Concord Road just east of Nickajack Creek. In reality, the skirmish — today known as the Battle of Ruff’s Mill — did little except to prove the force of Confederate troops in the area.

(The Center Square) — Georgia is doling out more than $415 million in federal relief money as grants to help nonprofits recover from the COVID-19 pandemic. The money, which goes to more than 30 recipients, is from the American Rescue Plan’s Coronavirus State and Local Fiscal Recovery Funds. “We remained focused on protecting lives and livelihoods throughout the pandemic, and our approach gave us a leg up in the Great Recovery,” Gov. Brian Kemp said

(The Center Square) — Georgia officials have lauded the decisions of companies to either relocate their headquarters or expand their operations in Georgia. Whether the state of Georgia offered tax incentives to those companies is a closely-guarded secret, and taxpayers will not know until the state says the project is complete and no longer “in progress.” Earlier this month, state officials announced Norma Precision Ammunition, a subsidiary of Swiss-based ammunition manufacturer RUAG Ammotec, established its