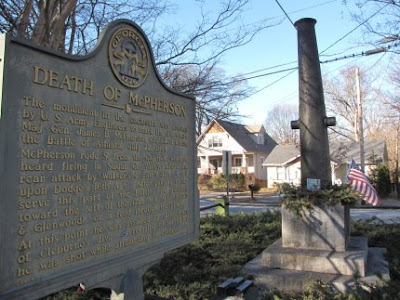 ATLANTA — Interstate 20 roars in the background, but McPherson Avenue is otherwise a quiet road.

It’s hard to imagine what this land was like 145 years ago — completely undeveloped and ravaged by war. Commercial and residential development has replaced trenches and battlefields over time, but at the intersection of McPherson and Monument avenues stands a reminder of the war that once raged here.

On July 22, 1864, during the battle of Atlanta, Union Gen. James B. McPherson was riding his horse when he stopped to observe the fighting. The general encountered Confederate troops under Patrick Cleburne’s command. They yelled, “Halt,” but McPherson unsuccessfully tried to flee; he was shot and fatally wounded.

“McPherson’s death was a great loss to me,” Gen. William T. Sherman later wrote. “I depended much on him.”

About Todd DeFeo 742 Articles
Todd DeFeo loves to travel anywhere, anytime, taking pictures and notes. An award-winning reporter, Todd revels in the experience and the fact that every place has a story to tell. He is the owner of The DeFeo Groupe and also edits Express Telegraph and Railfanning.org.
Website Twitter

President Obama has declared an emergency in the state of Georgia, paving the way for federal resources to aid with any state and local response efforts to projected winter weather.

To travel is to…

I’m mulling my recent escapades, trying to put everything into perspective — there were some unique, some historic and some downright weird attractions.