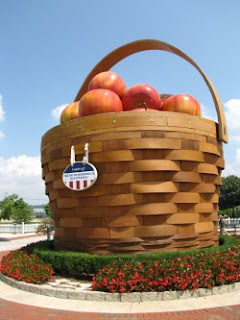 I’m mulling my recent escapades, trying to put everything into perspective — there were some unique, some historic and some downright weird attractions.

In less than a week, I traversed five states from the Southeast to the Midwest, took in an historic Civil War fort, the world’s most accurate replica of a ship Christopher Columbus sailed when he discovered a new world, the “Smallest Church in America” and the largest apple basket in the world among a handful of other attractions.

By definition, traveling means “to move or undergo transmission from one place to another.” But, that doesn’t explain why.

“There’s a world outside waiting to be discovered,” somebody once said. A world filled with the largest of things, the smallest of things and everything that falls in between — attractions that, quite frankly, if you never saw probably would not change your life for the worse. It’s a good thing most days – otherwise, one might think all there is to see in the world is a computer screen that endlessly displays word processing documents.

The best attractions — the ones that barely make the guide book — are those that can only be seen on a road trip a couple of blocks off the beaten path — from a field of concrete corn in Dublin, Ohio, to a tree that owns itself in Athens, Ga.

“Today the American road has no end; the road that went nowhere now goes everywhere,” Henry Ford II said. Luckily, there are endless places to stop along that road to everywhere because, I’ve learned, everywhere is somewhere to see.

Ohio may be the “Heart of it All.” But, Central Ohio might as well be called the home of all things large.

A one-stop guide to Cartersville