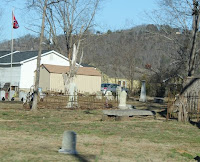 RINGGOLD, Ga. — Nine months after a major tornado ripped through this north Georgia hamlet, the signs of destruction are still visible.

The path through town that the EF4 twister — with winds reaching 175 mph, according to the National Weather Service — took on April 27 is clearly marked by trees, debris and missing buildings.

Eight people in Ringgold were killed. In total, the tornado killed 20 people combined in Catoosa County in Georgia and Hamilton and Bradley counties in Tennessee.

“The experience … solidified the community,” the Chattanooga Times Free Press newspaper quoted Ringgold City Councilman Randall Franks as saying. “I think new bonds and many new friendships were cemented. It took working together to make it through.”

Earlier this month, the Ringgold City Council voted in favor of a memorial remembering the fatal twister, The Catoosa County News reported.

“I believe that a memorial recognizing that day, what the city endured, and those who lost their lives would be great for the city,” The Catoosa County News quoted Franks as saying. “We could perhaps have a historical plaque or narrative tablet similar to those that we already have in town. I also think it is important that he have the names of those who lost their lives on the plaque. In essence, it may give the city a little bit of closure and act as a nice historical piece so people could read and learn about what we went through.”

The memorial will be located in Little General Children’s Park, according to the Chattanooga Times Free Press.

Several prominent Buckhead restaurants have now signed on for the 2016 Taste of Buckhead, organizers announced.

(The Center Square) — U.S. Sen. Raphael Warnock, D-Georgia, wants the U.S. Department of Education to explain how it plans to implement its “fresh start” plan for borrowers in default on their student loans. In April, the education department extended the pause on federal student loan repayments to Aug 31. Warnock joined several of his colleagues, including U.S. senators Elizabeth Warren, D-Massachusetts, and Bernie Sanders, I-Vermont, in a letter to the education department. “This pause

What is the story behind the ruins on Jekyll Island?

Driving along Riverview Drive on the north side of Jekyll Island, it’s easy to cruise past the tabby ruins on the side of the road. But, these ruins are among the most important in the state and have deep historical value.