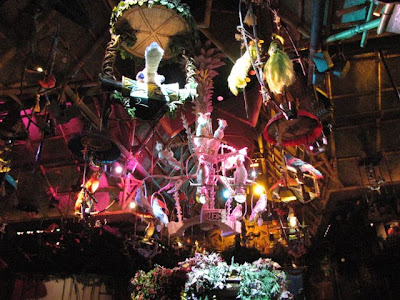 Walt Disney World said the original Enchanted Tiki Room show, which was replaced in 1998, will be returning later this month.

The show, which first appeared in Disneyland in 1963, was an original attraction when Walt Disney World opened on Oct. 1, 1971. The updated attraction — known as The Enchanted Tiki Room — Under New Management — featured a number of characters from recent Disney movies, including Iago from Aladdin and Zazu from The Lion King.

According to the official news release:

Prior to 1963, Walt Disney’s creative team had produced movable figures, but none had the sophistication of the bird-brained cast of the Tiki Room. José, Fritz, Michael and Pierre produce movements when solenoid coils hidden inside receive signals recorded onto magnetic tape and are regarded as the first “true” Audio-Animatronics figures.

They introduce a musical presentation by more than 200 birds, flowers and tikis. Even the audience gets into the act, joining in during the musical ditty “Let’s All Sing Like the Birdies Sing.”

While the show is steeped in tradition and maintains the original intent created by Walt Disney and his original team of Imagineers, Walt Disney’s Enchanted Tiki Room will feature the latest in technology – a state of the art show-control system, remastered audio, and a new versatile and energy efficient lighting system.

The show’s re-premiere is scheduled for Aug. 15.

Disney to layoff 4,000 more employees than it initially reported

The Walt Disney Co. is planning to layoff about 4,000 more employees than it initially reported to the federal government because of the ongoing COVID-19 pandemic.

While Walt Disney World has a reputation for being the happiest place on Earth, it has experienced a number of tragedies over the years.

Guests to Walt Disney World can once again hop between parks, but there are a few caveats.