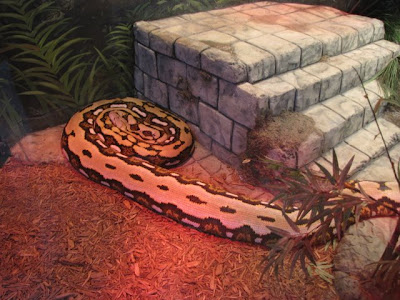 Fluffy, the Columbus Zoo and Aquarium’s record-holding python, died Tuesday of what the zoo described as an “apparent tumor.”

A necropsy performed by The Ohio State University College of Veterinary Medicine found that Fluffy had “a mass on her ovary,” the zoo said in a news release.

The 24-foot-long, 300-pound reticulated python had been a mainstay at the zoo since arriving in March 2007. Originally brought to the zoo as a temporary addition, Fluffy made Columbus her permanent home.

“When Zoo visitors saw Fluffy they experienced many emotions such as awe, curiosity and even fear” Zoo President and CEO Dale Schmidt said in a news release. “Everyone was moved by her presence and she created the connection for them to learn more, and care more, about misunderstood animals such as snakes.”

The Guinness World Records recognized the 18-year-old snake as the world’s longest, according to the zoo. Reticulated pythons are native to Southeast Asia’s tropical forests.

State lawmakers are pushing a new bill aimed at strengthening Ohio’s laws regarding the use of wireless devices and smartphones while driving.

Heath Haden threw for 270 yards and a touchdown too as Centre College exploded for 27 points in the second half to defeat Sewanee: The University of the South by a 34-17 margin at Farris Stadium in Danville, Ky. Trailing 10-7 at halftime, Centre (5-1) scored 20 points in the third quarter to wrestle the lead from Sewanee (2-5). Harry Meisner rushed for 73 yards to lead the Colonels ground attack, which ran for 211