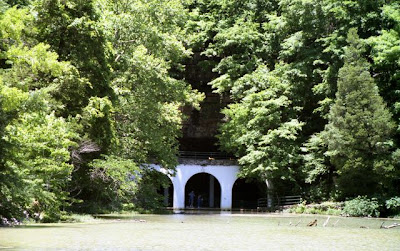 Not so much because of its natural splendor, but because of the musical acts that performed at the cave entrance. Roy Acuff, who eventually purchased the cave, was among the acts to bring his show to the area.

The 8-mile-long Dunbar Cave was formed millions of years ago and has always attracted people. During digs at the site, archeologists found Paleo-Indian artifacts buried near the cave entrance, and in 2005, Indian glyphs were discovered on the cave walls.

Over the years, the cave has had a number of interesting uses. During the Mexican-American War, saltpeter was mined for use in gunpowder. But the cave’s most frequent use has often revolved around tourism.

Leading up to the Civil War, developers built cabins on the site, according to The Tennessee Encyclopedia of History and Culture, and a two-story hotel later appeared after J. A. Tate purchased the land. The hotel lasted until the 1950s and a pool at the site was buried a decade later. In 1973, the state purchased the land to create a state park.

The 110-acre park today features a number of outdoor activities, including fishing and cave tours. For information, call (931) 648-5526.

IF YOU GO: From Atlanta, Clarksville, Tenn., is an easy weekend destination – a roughly 4.5 hour drive. Take Interstate 75 north to Interstate 24 west to Exit 11.

A portion of the renovated Read House hotel in Downtown Chattanooga has reopened for business.

November 18, 2014 Special to The Travel Trolley

Last Friday, Nov. 14, marked the 150th anniversary of a “tragic chapter of our history,” the burning of the city during the Civil War.

Meriwether Lewis’ life to be honored in Tenn.

October 5, 2009 Special to The Travel Trolley

On Oct. 7, Meriwether Lewis, the leader of the Lewis and Clark Expedition, will be honored for the first time with a national memorial service.