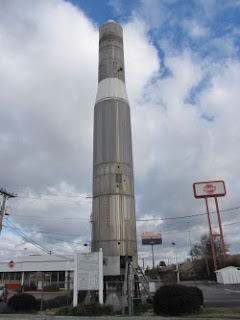 CORDELE, Ga. — A Cold War-era rocket on the side of the interstate isn’t an everyday occurrence. But, that’s what makes it worth the visit.

“That was the very point. It’s a unique and unusual landmark for Cordele and Crisp County,” The Cordele Dispatch in 2008 quoted John Pate as saying. As president of the Cordele Rotary Club, Pate pushed to acquire the Titan I missile that stands along Interstate 75.

The missile was acquired from the Air Force in 1968 after it was declared obsolete. The missile was flown from California to Warner Robins Air Base where it was stored for some time before it was given to the community.

“We were trying to come up with something that would make our community stand out,” The Cordele Dispatch in 2008 quoted Pate as saying. “I had visited Cape Kennedy that year and learned the Air Force was decommissioning the Titan missiles.”

Titan I missiles were used between 1959 and 1965 and is considered the country’s first Intercontinental Ballistic Missile (ICBM). The missile in Cordele stands on what has been dubbed “Confederate Air Force Pad No. I.”

“It’s become quite a landmark for us,” United Press International in 1987 quoted Don Sims, then-executive vice president of the Cordele Chamber of Commerce, as saying. “I was courting my wife years ago — she was from Cordele and I was from Lookout Mountain (Tenn.) on I-75 — and I came down here to meet her folks. Her directions to me were, ‘Go to the rocket and turn right.’”

IF YOU GO: Take Interstate 75 south to exit 101. The rocket is on the right next to the Krystal restaurant.

Like Loading...
About Todd DeFeo 717 Articles
Todd DeFeo loves to travel anywhere, anytime, taking pictures and notes. An award-winning reporter, Todd revels in the experience and the fact that every place has a story to tell. He is the owner of The DeFeo Groupe and also edits Express Telegraph and Railfanning.org.
Website Twitter

An Atlanta area transportation museum will celebrate the season with special events.

ATLANTA — Aeromexico restarted scheduled passenger service between Atlanta and Mexico City. The service is carried out on an Embraer 190 aircraft. “We are happy Aeromexico is providing nonstop service from Atlanta to Mexico City, with the possibility of connecting to othercities,” Aviation General Manager Louis Miller said in a news release. “This adds another option for our customers.” Aeromexico said the daily service will have an annual economic impact of an estimated $6 million

ATLANTA — Feeling a bit sheepish? Hartsfield-Jackson Atlanta International Airport will use 100 sheep as part of a test grazing program. The program, launched in conjunction with Trees Atlanta and funded by an anonymous donor, is aimed at controlling vegetation on a one-acre plot of land the airport owns along Riverdale Road. “We are constantly thinking of innovative ways to make the Airport more efficient, and we are eager to determine whether sheep grazing will