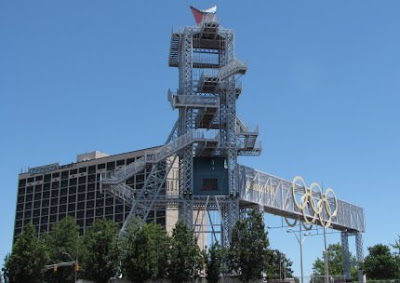 ATLANTA — As the Vancouver Olympics wind down, it may be time to retrace some of the landmarks of the 1996 summer games that took place here in Atlanta 14 years ago.

The former Olympic Stadium lives on — albeit it in an altered state — as Turner Field, home of Major League Baseball’s Atlanta Braves.

Perhaps the most apparent Olympic symbol that remains in town is the Olympic torch.

The torch was originally located in Olympic Stadium, but was moved to its current location at the intersection of Fulton Street and Capitol Avenue nearby Turner Field.

One last location worth noting is Centennial Olympic Park. The park was built as a central green space and remains a popular place for outdoor events. Sadly, the park is associated with the July 27, 1996, Olympic bombing that claimed two lives and injured more than 110 people.

About Todd DeFeo 819 Articles
Todd DeFeo loves to travel anywhere, anytime, taking pictures and notes. An award-winning reporter, Todd revels in the experience and the fact that every place has a story to tell. He is the owner of The DeFeo Groupe and also edits Express Telegraph and Railfanning.org.
Website Twitter

A starter’s guide to Atlanta

A visit to Atlanta might seem a little daunting – after all, there is so much to see. But, it doesn’t have to be.

Meet your neighborhood bartender, the actor

Kraig Dane acted in his first play in the sixth grade, but at the time, he didn’t realize it would be the start of a career.