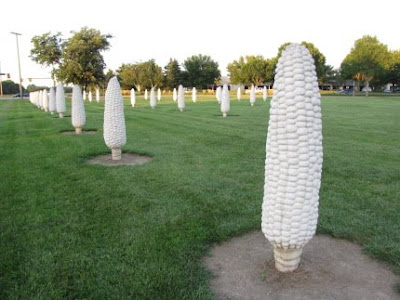 DUBLIN, Ohio – Dublin is a charming suburb of Ohio’s capital city. Celebrating its bicentennial this year, the town of 40,874 is perhaps best known for the annual Dublin Irish Festival or as the home of Wendy’s.

But one of the city’s true gems resides near the intersection of Frantz and Rings roads. On a small plot of land tucked in between office complexes, “Field of Corn (with Osage Orange),” better known as Cornhenge, features 109 six-foot-tall concrete ears of corn.

The eerily symmetric rows of corn were erected as a public art exhibit and tribute to the corn that once grew here. Sam Frantz, a pioneer of hybrid corn and his wife, Eulalia, previously owned the land and grew corn here.

Malcolm Cochran sculpted the concrete corn statues as part of the project commissioned by the Dublin Arts Council. The field was completed in 1994, and the project wasn’t without its share of controversy.

“It was very controversial when it was completed and even during the process,” the executive director of the Dublin Arts Council said in a July 2009 article published on thisweeknews.com. “The main problem with the piece was (people) thought tax money was being spent on 109 ears of concrete corn and that’s not the case.”

While the art exhibit has attracted much criticism over the years, it’s also drawn visitors from across the country.

“It’s quirky, weird and cool – all at the same time,” said Ruth Mitcham, a visitor from Atlanta. “I love how you’re driving down the road and all of the sudden, there are giant ears of corn sprouting from the ground. It’s crazy.”

At 10 p.m. on next Tuesday, Sept. 28, Denison students will have the opportunity to witness one such group performing traditional mountain songs in their original spirit.

Unique acoustic- rock group brings its sound to the Mitchell Center for night of fun.