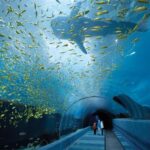 The largest aquarium in the world is home to tens of thousands of marine animals. More than 10 million visitors have passed through the aquarium since it opened in November 2005. Highlights include great hammerhead sharks, four beluga whales and four whale sharks, which call a 6.3 million gallon tank home. In 2011, the aquarium launched a daily Dolphin Tales show.