I’ve visited the well-known tourist attractions around the world. But for me, ferreting out authentic local experiences and out-of-the-way quirky places is one of the great joys of traveling.

In Palermo, Sicily, a snippet in a guidebook listed a puppet museum. My friend and I were the only visitors. When the curator saw my interest, he treated us to a personal marionette show. When I asked questions about the puppets, he gave us a close-up look at them and a chance to manipulate them. Then, he gave me directions to the studio of a master puppet artisan. I got a tour of his miniscule workshop and he told me about an upcoming show in a local park. 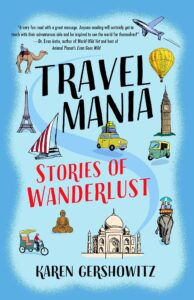 What is the secret to finding unusual places? Talk with locals who share your interests. That can be jazz, firefighting, soccer, breweries or just about anything. I’m drawn to crafts, especially artists’ studios. I’m a sucker for gardens, puppets and anything that hints at bizarre. A smile and genuine interest gets people to open up. Asking specifically for tips can lead to amazing finds.

Traveling near Knoxville, Tennessee, a friend and I visited the Museum of Appalachia. In one small cabin a guitar player sprawled on a hand-carved wooden chair as his sausage-like fingers flew. The fiddle player broke into a jig, playing all the while. A tall, stately woman played banjo and sang with a soft twang. Although there were only three of us in their audience, they played as if they were at the Grand Ole Opry.

At the end of each song, we applauded enthusiastically. My friend asked about their instruments and some of the songs. The fiddle player tipped his hat in appreciation and said, “You gals should go over to the Lake View Inn tonight.” He went on, “Every Monday they have a pickin’ session. It’s great fun.” That’s how we ended up at a free, impromptu concert, in a motel dining room. On stage (in front of the salad bar) amateur and professional musicians played for hours to an exuberant audience.

Think and eat like a local. Go to that small, charming bistro or trattoria or noodle shop. While there, ask people around you for suggestions of other places to eat and visit. People love to talk about their hometown and share their favorite haunts. I’ve had some of my most memorable meals at hole-in-the-wall places I’d never have found on my own. I even got invited to a neighborhood potluck.

Ask people for their favorite places to hangout. You may not end up at Carnegie Hall, but you could hear a wonderful concert in a local church. Perhaps you’ll discover a local pub with great fiddle music, a local festival, or the most scenic walking trail in the area.

If you’re on a road trip, take it slow. Go on back roads and wander aimlessly. With GPS you may be lost for a while, but you won’t be lost forever. While I’ve been “lost” I’ve found pristine beaches, diners straight out of the 50s, a vineyard and winery that wasn’t listed in any guidebook, plus some gorgeous scenery. At one produce stand I got into a conversation with the farmer’s wife who insisted I sample every variety of heritage apple and tomato they grew, while she told me about the origins of the seeds. Be prepared to slam on the brakes and make U-turns if you spot something, you just never know what you’ll find.

Pick up a local newspaper, especially the weekend section. You may learn about local events far off the radar of guidebooks. I’ve discovered artist studio crawls, a midnight bonfire complete with “true” ghost stories told by the town’s historian, a naturalist tour of local tidepools and more.

If you see something out of the corner of your eye or hear something interesting go investigate. In Hokkaido in northern Japan, we heard the insistent sound of drumbeats. That led us to a parade with costumed groups of marchers competing for trophies. Strolling around Montreal at Halloween led us to crowds of costumed people partying. A small sign in rural Pennsylvania led me to one of the outrageous salvage stores I’ve ever seen, complete with life-sized dinosaur and penguin sculptures.

By the way, if you’re traveling internationally, speaking the local language isn’t a necessity for getting connected. I speak only English fluently; fortunately, in most parts of the world someone will speak at least some English. Students are sometimes happy to act as impromptu guides in exchange for a chance to practice with a native speaker. In Indonesia two students befriended me, showed me their town, walked me through rice paddies to see a cloud of bats emerge from a cave at dusk. Then they invited me home to meet their family and have dinner with them.

After you’ve seen the must-see sights, lose the guidebooks. Be inquisitive, be flexible and chat up everyone you meet. There’s a world of hidden gems out there waiting to be discovered.

About Karen Gershowitz 1 Article
Karen Gershowitz, author Travel Mania: Stories of Wanderlust, has been traveling since age 17 when she boarded a plane to Europe and stayed there for three years. She has since traveled to more than 90 countries, experiencing countless bold, once-in-a-lifetime adventures: climbing Mount Kilimanjaro, trekking atop an elephant in Thailand, hiking in the blistering heat of the Moroccan desert—and much more. While studying ceramics as an undergraduate at the Kansas City Art Studio, Karen proposed and received a grant to photograph ceramics studios, potters and their work throughout Japan. She later built a career as a marketing strategist and researcher with companies who sent her around the globe to conduct focus groups, interviews and meetings. She lives in New York City, but is a citizen of the world.

Finding quirky delights where you least expect to find them

To me, the real delight of any trip is finding that off-beat place, perhaps somewhere that doesn’t quite make the guidebooks.