Rebels under the command of Maj. Gen. Patrick Cleburne on Nov. 27, 1863, took up positions at Ringgold Gap near the Western & Atlantic Railroad pass through Taylor’s Ridge. Meanwhile, Union Maj. Gen. Joseph B. Hooker sent 12,000 troops after the fleeing Rebels.

Cleburne ordered his 4,100 troops — aided by a pair of cannons — to wait for the approaching Union soldiers. As Union troops were almost on top of the Confederates — within 100 yards — the Rebels opened fire, the start of an intense, five-hour fight.

Although greatly outnumbered, the Confederates held the pass; 221 Confederate casualties were reported compared to 507 for the Union side, though many believe the number should have been higher. Out of this encounter, Cleburn picked up his nickname, “Stonewall of the West.”

Today, the battle is commemorated with a pocket park near downtown Ringgold; a monument to the soldiers from New York is located near Tiger Creek at the Ringgold Water Treatment Plant.

The pocket park’s centerpiece is a relief map detailing troop movements. In 2009, a memorial to Cleburne, an Irish American soldier who was killed during the Battle of Franklin in November 1864, was erected in the park.

In 2011, the site was listed on the National Register of Historic Places.

Also, the nearby Western & Atlantic Railroad depot, which opened in 1850, was damaged during the battle. It was repaired using limestone blocks, which are still visible today. 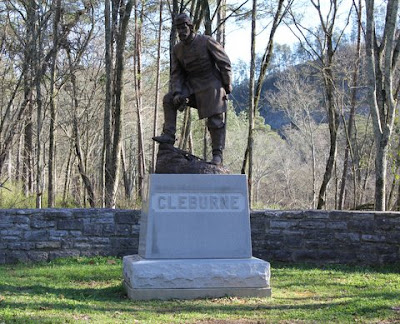 The house up the hill from the Chattahoochee River played an important role during the Civil War. It was here in 1864 that Union Gen. William T. Sherman planned the siege of Atlanta. The nearby area called Mt. Wilkinson or Vinings Mountain provided Sherman with his first view of Atlanta. Prior to the war, Hardy Pace, operator of Pace’s Ferry, built his home in what was then called Vining’s Station. Federal troops, pursuing Confederate forces

Ga. Inmate to be Executed

Condemned murderer Mark McClain is scheduled for execution by lethal injection at 7:00 p.m. on Tuesday, October 20, at Georgia Diagnostic and Classification Prison in Jackson.

With the summer travel season in full swing, there’s no time like the present to head out of Dodge (proverbially speaking) and check out any number of Southeastern destinations.