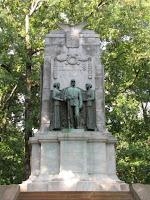 ATLANTA – A new book detailing Civil War sites statewide is a must-have for heritage travelers and history buffs looking to see the places that made history a century and a half ago.

“Crossroads of Conflict: A Guide to Civil War Sites in Georgia,” written by Barry L. Brown and Gordon R. Elwell, features information about more than 350 Civil War sites throughout the Peach State. The book, released just a year before the 150th anniversary of the Civil War, builds on sites the Georgia Civil War Commission identified in 2000.

In addition to battle descriptions, the book includes addresses to relevant websites and GPS coordinates.

This week, Brown participated in a number of book signings, including a stop in Rome.

“The turn out to this book signing is evidence of the incredible excitement surrounding the sesquicentennial anniversary of the war,” Chris Cannon, director of communication at the Greater Rome Convention & Visitors Bureau, said in a news release. “In coming months and years, Rome will see even more excitement in celebration of our area’s heritage.”

The Andrews Raid: A timeline of events

Thursday marks the 150th anniversary of the Andrews Raid. Here’s a timeline of events 150 years ago.

The Andrews’ Raid lives on in present day Kennesaw. In addition to a number of monuments dedicated to the raid located in downtown Kennesaw, The General itself is on display.

By Todd DeFeo CLARKSVILLE, Tenn. – By the 1930s and 1940s, Dunbar Cave was a popular destination. Not so much because of its natural splendor, but because of the musical acts that performed at the cave entrance. Roy Acuff, who eventually purchased the cave, was among the acts to bring his show to the area. The 8-mile-long Dunbar Cave was formed millions of years ago and has always attracted people. During digs at the site,