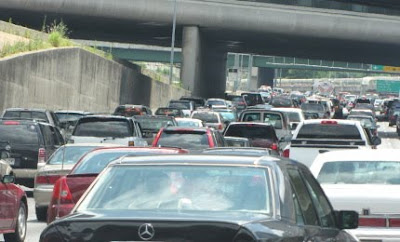 ATLANTA – Here’s something to think about the next time you’re out on the road: an estimated 38 million Americans would fail a driver’s test if they took it today.

That’s according to the 2010 GMAC Insurance National Drivers Test, which revealed that upwards of 1 in 5 licensed drivers (18.4 percent) would fail the test. The average score of the 5,202 drivers who took the test was 76.2, down from a score of 76.6 in 2009; a score of 70 percent or below is considered failing, according to GMAC.

“It’s discouraging to see that overall average test scores are lower than last year,” Wade Bontrager, senior vice president of GMAC Insurance, said in a news release. “American drivers need to make safety a top priority and be aware of the rules of the road at all times. The National Drivers Test allows everyone to brush up on their driving knowledge with a brief refresher course.”

The survey found that Kansas had the best drivers, and New York drivers ranked last for the third time in the survey’s six years. New Jersey drivers have nothing to brag about, with 39.9 percent of drivers failing the test; the state ranked second to last.

Georgia ranked No. 32, and its drivers scored a 76.7 percent. That’s a vast improvement from the No. 47 post that the state occupied the previous two years.

In a bit of good news, only five percent of the survey’s participants admitted to texting while driving. A number of states, including Georgia, have enacted laws prohibiting drivers from texting while behind the wheel.

“Motorists traveling on Georgia’s roads will be safer as a result of this new law. Distracted driving is a hazardous and deadly practice that needs to end,” U.S. Transportation Secretary Ray LaHood said in a news release in response to the new Georgia law. “It’s time for Americans to follow Georgia’s lead and just put their devices down. Texting while driving is just too risky.”