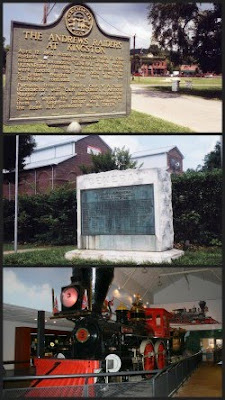 KENNESAW, Ga. – North Georgia saw its fair share of battles during the Civil War, but “the most extraordinary and astounding adventure of the war,” as one Civil War-era newspaper put it, typically doesn’t garner more than a few words in most history books.

The Andrews Raid, also known as The Great Locomotive Chase, took place 148 years ago today. Led by James J. Andrews, a group of Union spies planned to steal a train locomotive and destroy the Western & Atlantic Railroad, a vital link between Atlanta and Chattanooga, Tenn.

The route of the Andrews Raid can be easily retraced in the better part of a day. Historic markers, railroad depots and other raid-related places await the curious traveler. That includes the two stars of the raid: the General and the Texas, two of the locomotives used.

The Marietta Museum of History, located in the Kennesaw House, is the starting point for anyone who wants to retrace the Andrews Raid. The museum features exhibits about the raid and the city’s history.

The Southern Museum of Civil War and Locomotive History houses the General as the centerpiece of the museum. It is also home to a display about Glover Machine Works, a local engine builder.

The Cyclorama, located in Grant Park in Atlanta, is best known for its painted depiction of the Battle of Atlanta on July 22, 1864, but while visitors are waiting to view that painting, they have the chance to see the locomotive Texas, the engine that ultimately caught up with the General to help end the chase.

There are certainly more stops that could be made along the route of the Andrews Raid, but these locations give willing travelers a nice overview of the raid and can be seen in a day or two.

About Todd DeFeo 797 Articles
Todd DeFeo loves to travel anywhere, anytime, taking pictures and notes. An award-winning reporter, Todd revels in the experience and the fact that every place has a story to tell. He is the owner of The DeFeo Groupe and also edits Express Telegraph and Railfanning.org.
Website Twitter

Atlanta Braves to move to Cobb County in 2017

The Atlanta Braves are moving to the city’s northern suburbs in time for the 2017 season, the team said Monday in a surprise announcement.

Taste of Buckhead is scheduled for Sept. 15 at Buckhead’s newest event space, The Stave Room at American Spirit Works.

Officials: Beware of deer this fall

Georgia authorities are urging motorists to be cautious of deer this fall.