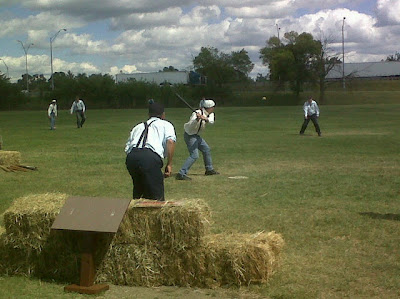 Certainly, there was no arguing calls. This game is a gentleman’s game.

While the game was unmistakably baseball, it was a different game than played by today’s major leaguers.

Players on the 31 teams that participated in the 19th Annual Ohio Cup displayed their love of the game.

The baseball played here follows rules from the 1860s. So, batters could choose where they wanted their pitch, balls caught on the first bounce were an out and sliding was prohibited.

Mercer University relied on a strong running game and a stout defense during a rainy affair Saturday to defeat Berry College by a 43-0 margin to remain unbeaten.

Special to The Travel Trolley GREEN, Ohio — Record snow and freezing temperatures haven’t cooled things down at Akron-Canton Airport (CAK), the airport announced. Customers from throughout the region helped CAK sizzle this January. Nearly 107,000 passengers traveled to and from CAK during the month, making it the airport’s busiest January of all time. That figure is up 4 percent compared to 2009 and beats the airport’s previous best January by 4,425 passengers which was

Increasing the motor fuel tax to fund infrastructure projects across Ohio is a matter of economic development and necessary for the state to remain competitive, witnesses told state lawmakers Wednesday.