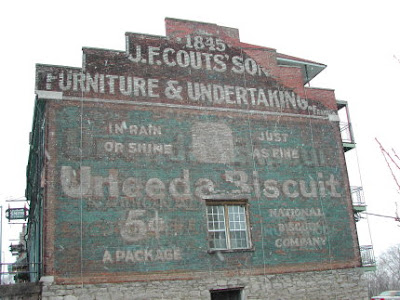 CLARKSVILLE, Tenn. – The Cumberland River has always played an important role in the history of Clarksville.

The river helped transport tobacco grown in the Clarksville area to a number of destinations, including Pittsburgh and New Orleans. In fact, the city was once among the largest markets for a type of dark-fired tobacco. Perhaps it’s no surprise that one of the city’s newspapers was even named The Tobacco Leaf.

While tobacco is no longer the basis for the city’s economy, a reminder of the city’s past is clearly visible on the side of a building on the city’s Public Square and overlooking the Cumberland River.

While The Poston Building isn’t the most exhilarating attraction in town, it is an important reminder of the city’s past and the crop that helped bring the city to prominence.

Fort Donelson National Battlefield, located near Dover, Tenn., is planning to commemorate the 149th anniversary of the Fort Donelson Campaign with a series of encampments and the start of a new book and film discussion series.

The number of Georgians traveling at least 50 miles this holiday is expected to increase 0.5 percent to more than 2.5 million, AAA predicted.

What is today Rock City has been a popular tourist attraction for years. But, it was until the 1930s that the Rock City of today began taking shape.